THE SILENT BREATH OF TREES

By Okolo Chinua 2 months ago 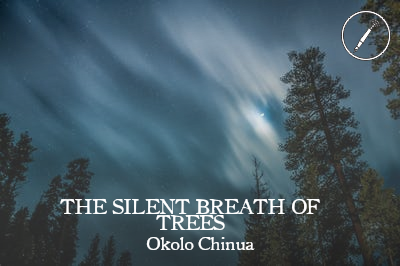 I watch from behind my seat as Mrs.Okogbuo goes on and again about the essence of X and Y and I wonder why people bother so much about innocent alphabets. Nonso kicks me from behind as an attempt to get me to sit up and act attentive before she picks me out and decides to ask questions to everybody around me. The sun was almost at its peak meaning that her class was about to end. Break time came immediately after her class. There was nothing too wonderful about my looking forward to this time but I always longed to rush out of the class and place my head under the tap and let the water flow. Ikemefuna called it the purification of mathematics nonsense and I wonder where he had even learnt to use such high grammar.

"Me?" I touched my chest, quivering. Had she caught me while I was lost in thought?

Ikem stood up at the same time as me. We looked at ourselves, then back to her wondering who she was actually referring to.

I exhaled. I could swear my heart would have lept out if I had been the one she was referring to.

Community Secondary School, Nnewi had a huge compound with three long stretched bungalows, one for the senior section, one for the junior section and the other for the staffroom. Even the principal stayed in the staffroom. The school's field occupied the remaining space. I usually enjoyed spending my break time playing in the field. Whenever I was there everybody knew. You'd keep hearing 'The boy!!' here and there as I dribble my way to goals. I didn't know why but to me playing football was like breathing. I never had to do much to excel. However, today I leaned against the wall of the SS1 classroom and observed the girls playing kpukpukpoogene under the mango tree. A little distance away from them were some other girls muttering to themselves, laughing and playfully hitting one another. Probably one gossip or the other.

"You waste time oh," I said and turned to face Ikem who was coming towards me from the staffroom opposite the senior section.

"Kedu na. Why Otigwogwo call you?"

"The boy!" He climbed up to join me. "Ka anyi rukene field. May we reach field."

"The boy!" he continued, smiling.

"Ikem, I'm serious," we were about approaching the field where boys from SS2 were playing against themselves.

"The boy, ka anyi gabanu. Let's be going. Break time will soon be over."

A lot of things ran through my mind at that instant, how Ikem was going to cope, the family drama he'd have to face, his sick mother, and how that could be the last time I might see him considering he might not be able to continue schooling.

"Kedu ka I ga-esi mabu. A gam eke gi okpo oh. How do you want to know before? I'll knock you oh," he said playfully as he dragged me towards the field.

Nnewi to Ekwulobia by bus would take an hour but we had no intention of entering the bus. We had already used our transport fare to buy buns during break. Trekking back to Ekwulobia was something we were used to as we knew all the shortcuts to make the walk a three-hour something.

"Emeka! Emeka! They'll be calling you Emeka now you won't answer. If it's 'The boy' now you'll start smiling. Nyem the ball biko," Ifeanyi hissed as he snatched the ball away from my grasp. I, Ikem, Ifeanyi and Nonso were used to taking the walk. Mr. Books taught us about Mandela's 'Long Walk to Freedom' and that automatically became our motto for our journey. We would take off our school uniforms, put on our jerseys that we had used to play during the break period. Then after tucking the uniforms into our bags, we would pass the ball to one another as we walked.

"What later happened to Ikem, Daddy?" My eyes glow with curiosity as I stare into my father's face for answers.

"Ikem finished SS3 with us. He wrote the WAEC and NECO. He's also a big man today. Oya, time to sleep. It's late," he tucks me into bed, then roughly rubbing my head with his palm before covering me with the wrapper he said was his favourite wrapper when he was young. I hug myself tightly around the wrapper wondering if I can become Father, If I can be 'The boy.' My imaginations do not leave me even when I fall asleep. Emeka stands at the door and watches his son who had now started snoring. He knew the boy was feeling sleepy but had just wanted to complete the story. Complete... He had completed the story or had he? He wondered if he should have just told him that some stories are like the moon, they're never full or complete. He gently closes the door as he walks to his room. Complete... His mind drifts back again.

I walked out of the class sweating. Teaching these children from the village Integrated Science and Mathematics was never easy. Somebody would always ask you why this was that and for every answer, you gave he had another 'why' to drop and series of 'why's' for other answers to follow. However, I needed the money to save up for my going to the higher institution. I couldn't keep depending on my parents as I had six other siblings that still needed to go to secondary school after me because there wasn't enough to fit everybody in at once. We went to secondary school one after another, when one person was done with Class Five, our SS3 then, the other would enter and the elder one would begin to fend for his or herself. Ikem like Ifeanyi and Nonso had joined us to teach at Comprehensive College, Ekwulobia. His was not to further his education but to aid his ailing mother as he was the only child. I wondered why he had not yet come to school but since it was not his first time being that late I wasn't all too worried.

"The boy! The boy!" Nonso came hurriedly towards me, panicking.

"Ikem oh. O Ikem oh. Kedu ihe anyi ga-akoro mma ya. It's Ikem oh, what are we going to tell his mother."

"What do you mean Ikem now? Onwe ihe O mere gi? Did he do anything to you?"

"You don't understand. Ikem anyi anorozi. O nwugo. Our Ikem is no more."

I don't know how to explain it but at that instant my life dropped out of my body.

I noticed the students were arching their necks towards us to know what we were talking about. I managed to hold Nonso and walk to the staffroom. There, I sank into tears.

Some people say it was the land issue that killed his father that also killed his son, that when untimely death comes for one's father it takes the son with him as extra. It didn't matter to me whether his death was natural or orchestrated by people. It couldn't bring him back. Achebe writes that when suffering comes knocking on your door and you say you don't have a seat for him he tells you he came with a seat.  I wonder if he was referring to Ikem's family.

Ikem... My strength... That was what his father named him...

Other posts by the writer:

No Notifications Here Yet